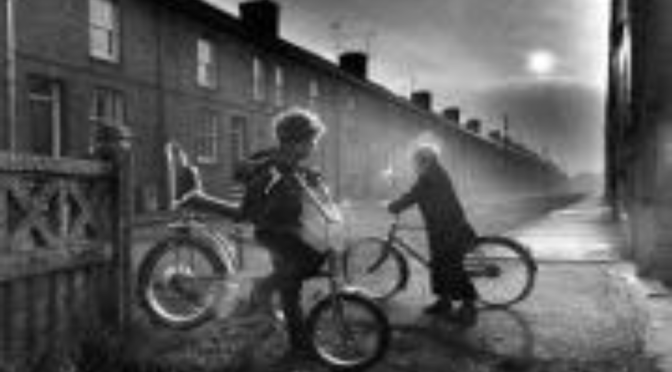 Back when I was ten, eleven, maybe twelve years old, me and my best friend would plan bike hikes, usually on a Saturday morning, to explore different local attractions.  But not the ones that you’d find in a travel brochure. Back in a time when you might tell a parent that “I’m going over to Mitch’s house” and then take off on your spider bike, no helmet, no kneepads, no money, no cell phone, and best of all, no worries. And the parent would reply “uh.. yea.. o.k… have fun!” You needed no GPS because you already thought that you knew where you were going because you had planned it in math class on Wednesday.

We did this on a regular basis. Mitch was much more in tune with motorcycle gangs than I was at this time of our lives. Depending upon how many friends had joined us for the day, our imitation of the Hell’s Angels grew to an intimidating number of bikers, maybe six or seven, dependent upon who hadn’t finished their chores that day. We’d cruise the streets of our hometown, ignoring any safe biking rules that were in place at the time. “Get your spider bikes runnin’ ‘Head on down the highway!” One magnificent day only three bikers showed-up. Mitch, our friend John and myself. Destination? The town dump. It was a magical, mystical wonderland. At least for a twelve-year-old boy. We had one very powerful slingshot, three bikes, no bottled water, and no snack foods. So we only stayed seven hours. The dump was a dump. But it had highlights that you just didn’t find in your own backyard. Number one would be rats. Number two were the big tube televisions. Lastly, and most interesting at the time, syringes and blood samples from the local hospital. Yep, they just dropped off the evil waste at the dump for a few twelve-year olds with which to play. So we spent the day blowing up T.V.’s with a slingshot (tube T.V.’s would explode), killing rats and perhaps injecting dead rats with Mrs. Smith’s blood sample syringe.

The more consistent run of our biker group was a trip to the Woodstock observation tower. A quick five-mile ride out-of-town on your spider bike, with no helmet, no knee pads, no money, no cell phone.  Across Burnshire’s Dam bridge to the base of the mountain. Then up the winding mountain road, which took you to an elevation of 2000 feet. It tires me to think of it now but back then we’d basically push our bikes up the side of the mountain. It was steep, the road just winded back and forth, back and forth. And it was summer, dammit! As you neared the top, there was fresh spring water spewing out of a steel pipe, sticking out of the mountainside. Reaching this point was accomplishment number one. You knew that you were close when you reached the water station. Next, a short hike by foot to the tower. I looked it up, the tower is 298 feet tall. I think that I was five feet tall. So up we went, three flights of stairs to the top platform. We didn’t realize it then but this is where you come to see the famous Seven Bends of the Shenandoah River. But that’s not why we came here on this treacherous journey. We were twelve-year-old boys. So we pissed off of the tower. We spit, repeatedly, off of the tower. And like so many that came before us, with little pocket knives, we etched our initials and other things into the wood of the tower. But that was the boring part of the day. Next, the decent.

The road was partially graveled, but mostly just dusty, especially in summer. Hootin’ and hollerin’ as we started down the mountain, you picked up speed Real fast. Forty something year memories are sketchy at best, but I swear on my spider bike’s seat that one day our friend Jay came down that mountain with little or no brakes. Just Chuck Taylors, dragging his feet during the rough patches, going too fast through the rest.
I remember parts of the trip down the mountain as relaxing. One day, we had twenty something deer cut across the road in front of us. We sat perfectly still and watched them disappear into the silence of the woods. Then there were the terrifying parts. Like the straight stretch of road we knew as the “rumble strips”; limestone ridges exposed from soil erosion, where your knees had to act as shock absorbers while your butt still took a beating.

And Jay was still dragging his feet.

When we got back to the bridge, there was nothing but giggling and laughing. We were stupid. We were twelve-year-old boys. As the gang got back to town, we had accomplished something that no one else had done that day. And we were better off for it. At the end of the day, we went our separate ways.

“Hi Mom… yea I was just out with the guys for a ride”. If she only knew.

Lastly, the trip to the Little Wolf Hole. There are two Wolf Holes. One big, one little. They’re local swimming holes outside of our town. The Big Wolf Hole is quite visible from a main road, people bring lawn chairs, etc. The Little Wolf Hole, well you gotta know where it is. You drive far out into the country and then you take a left. Into the woods. Back in the day, during the spring time, potentially scary people would just hang out, drink beer, smoke things and carry rocks back up from downstream after the spring thaw, in order to dam up the swimming hole for the summer season.

So Mitch, John, and myself were probably twelve at the time. Skipping town for the day, we were. Spider bikes, no helmets, no kneepads, no money, no cell phones. The road is a two-lane major back roads thoroughfare, connecting the smaller towns and communities. From town to the Little Wolf Hole is probably twelve miles. So we’re cruising along, our little knees pumping, minding ourselves, dodging occasional traffic. When out of the corner of our eyes did appear a large German Shepherd, sprinting in our direction, a continuous growl coming from behind a big set of drooling fangs. I wasn’t paying attention that day in school, but apparently waking a large dog from a peaceful sleep gives him a really shitty attitude. See kids, back in our day, dogs weren’t always restricted at home. As a matter of survival, the knee pumping hit hyper speed. The dog was probably just as big as any one of us. Just as death seemed a certainty, the Shepherd came to the end of his chain. A loud yelp from the dog as he flipped in the air, and we began to laugh. And we laughed and laughed, our knee pumping pace greatly reduced. We hung out at the Little Wolf Hole, jumped into the cool water, even rode our bikes into the water.
The stream running into the Wolf Hole is a trout stream, so the water is always cool and refreshing. Eventually it was time to go, so off we went on our trek back to town. We’re peddling along and again we come upon that same dumbass dog. Laughing we were until we realized that he was no longer chained.  The knee pumping went back up to hyper speed. The Shepherd’s nipping at John’s ankles. We’re going faster and faster. Then the Shepherd finally lost interest.

Moral of that story. You don’t have to outrun the Shepherd. Just outrun your friends?