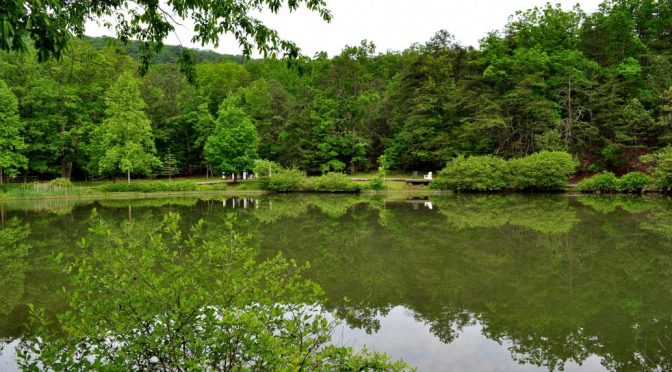 Back when I had my own one-man fishing guide service…

Today, I took three mentally challenged women and their mentor out for a day of fishing. The cosmetic reason for our excursion was to learn the art of fly fishing…but the ultimate, real reason was to have a great day out in nature, on a spectacular Wednesday in October, during the peak of leaf season. Not in a group home setting in Richmond, but here in the middle of God’s country, the Valley in all of its Fall glory.
I’ve got to admit…I was very apprehensive at the prospect of fishing with people with such extreme challenges. Liability issues, will all three ladies actually enjoy the idea, am I even capable of teaching such an elite group?
The three fishermen for the day were Shirley, Linda and Mary Lou. Shirley is a black woman, probably 63, very light skinned , short, a little stout, with a face that evokes a calm, even feeling in you. Her eyes glittered like she knows something that you don’t know. But she doesn’t talk too much.
Linda is a younger black woman, probably 40. Of the three, she spoke the least, but when directly asked a question to which she had a good answer, she spewed out a ray of happiness that warmed you down to the center of your heart. It wasn’t clear or loud, but you knew that she was sincere in her response. Her teeth were almost gone, capped in gold and silver, and her hands were clinched with arthritis.
If you stood Mary Lou in the middle of a grocery, she’d blend right in with the locals.
Fortyish, white, long brown hair…not a person would notice that she was special until she spoke or moved. At the lake, Mary Lou reassured me more than once by saying “It’s O.K., you’re a trained professional”.
We fed the ducks at the lake prior to the required lesson. Fortunately (for entertainment’s sake), the ducks are much more professionally trained than I am. They came right up and ate the bread crumbs that I had brought along for the ladies. As I spoke of the confusing differences between fly fishing and Normal fishing, two of the three ladies stared off at the lake and the geese…as I handed them different flies, weighted and dry, they became more interested…but when I got Mary Lou up to cast, it caught the eye of Shirley and Linda…then we had a class!.
There was nothing biting at the lake, so we detoured…first to the community store for a civilized bathroom break. Then off to Tomahawk Pond. We spent a very short time at the pond. Linda seemed so relaxed on the pond-side bench, taking in all that Mother Nature has to offer. Relaxed is good, especially considering the fact that Shirley’s back cast was coming dangerously close to Linda’s head. I hardly noticed because Mary Lou kept reassuring me that she was in the hands of a “trained professional”.
Lastly, we toured the facilities at Shrine Mont. As fate would have it, Dick Moomaw (head honcho of the Retreat) pulled into the drive just as we parked. He gave us Carte Blanche up into the main building, touring the 1800 circa building all the way up to the Grand Ballroom.
Bonus Coverage, as I explained to the ladies, was a short trip up the hill to the outdoor chapel. The chapel, if you haven’t been there, is basically carved out of stone. Seating for church services is comfortably nestled into the surrounding woods. If I was indeed Robin Hood, this is where I would have married Maid Marion.
We sat there, in the middle of nowhere. Mary Lou said that this time in the woods had lessened the strain in her shoulders that she had brought along with her from the home in Richmond. Shirley and Linda, true woman of the church… sat, stared and said nothing. Tried to get them to sing, but they just smiled. Content, relaxed, eyes gazing upon stone crosses, surrounded by trees showing off their autumn colored leaves, we sat there in silence.
I’ll probably never know what those ladies were thinking.
What was I thinking?
What a good day.