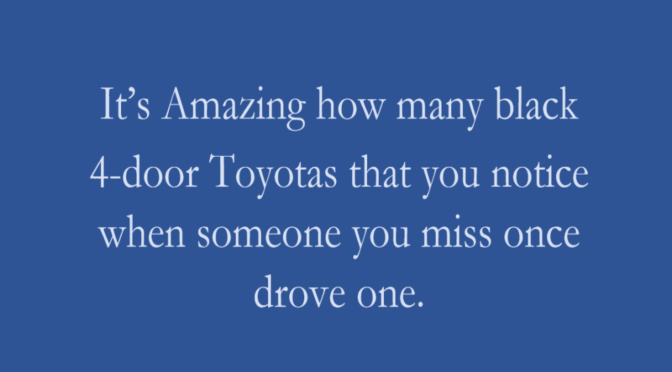 You know that flood of memories that you get when you hear that certain song on the radio, catch a whiff of a certain aroma in the air, or taste something special for the first time in years.  A person’s five senses sure can play games with their mind; some producing smiles full of happiness, while others stir the pot of sadness which you thought were safely set aside forever.

My own mind was recently toyed with by those peculiar mental games.  A jolt of instant recall causing you to say to yourself “Hey, that was really weird”. That moment in which you think of that one particular person or a specific event from your past.

For the past twelve months, I’ve been sharing these silly stories of mine with anyone who will listen.  Not because I think that I’m the greatest writer in the world, but for the positive feed-back…the human interaction of it all.  I’ve spent the past year fixing all the physical problems with my body, but never reached out for help with the mentally anguished side (other than writing everyday).

But I was lucky enough, during the last year or so, to have developed a meaningful friendship with someone who had been a stranger just two years ago.  Unlike tossing words out into cyber-space as a part of a ‘chat’, our conversations were real and helped me in healing the parts of me that were hurting, but not seen.    But now, in yet another test of my inner strength, my friend will soon be moving far away, leaving a hole where I had recently found a strong crutch of support.  Which has my thoughts spinning wild once again.

Which somehow brings us back to the point of this story.  The streets in the town in which I live are traveled daily by two-thousand cars or so.  Different shapes, sizes, and colors.  Lots of pick-up trucks and SUV’s.   Recently though, as I drive about town, it seems that every tenth or twelfth car that I pass is my friend’s vehicle.  Which is impossible, that would be silly.  But the same car keeps appearing to me, over and over and over again.  Several times, as I’m stuck in a daydream at an intersection and mindlessly looking about, there goes that car.  Unloading groceries in the drive-way at the house.  There goes that car again.  Pull into a parking spot at Walmart.  Same car, same model.

But it’s not the same car of course. It’s just that the thought of my friend’s departure is weighing heavily on my mind.

But what causes this phenomenon?  Being the official Keeper of All Time & Knowledge in the Universe, and professor of Worthless Information, I had to investigate.

The first thing that I discovered is that man has been developing different theories on this subject for years.  And there are 1000’s of different theories.  Affective Memory.  Odor-evoked autobiographical memory (the Proust phenomenon).  Cued recall.  There are lots of evolutionary explanations that seem logical.  I kindda like to think it’s somebody talking to you.

The consensus of the different studies on the subject is that smell evokes the most memories amongst the five senses.  I would have guessed sound.  How many times have you heard a song and instantly thought “That reminds me of___” (Fill in the blank)

The other summer, after the death of my friend, I was traveling down a two-lane country road on the long drive to the funeral home for a memorial service.  I had traveled these twenty miles of road many a time before and had two radio buttons preset for Classic Rock stations broadcasting from opposite ends of the county.  Somewhere in the middle of the drive, reception would always fade, so I could conveniently switch from one station to the other.

My heart was filled with sadness, my mind clouded with the dread of the afternoon affair.  The only sounds, other than my thoughts, were the radio blasting and the rush of wind through the open windows.  Ten miles down the road, Mitch took control of the airwaves with one of the most recognized opening guitar riffs in Rock ‘n’ Roll history.  The Rolling Stones- “Honky Tonk Women”.  Mitch and I had been huge Stones fans since high school and a little smile began to grow across my face.  Then the radio signal began to fade as I cursed in frustration.

“Son of a Bitch!” while pounding on the dashboard.  My moment of happiness slowly turned into a distant version of the song drowned in static.  I didn’t want the moment to end and waited until the static became too annoying before changing the station.  I pushed that preset button and heard the distinctive intro to “Gimme Shelter”, another Stones Classic.  My smile got bigger and less cynical.  It was if Mitch was talking to me…

“Hey, just get over yourself” as images of him ran through my head.

I tried to time the end of the drive with the end of the song, but it was not to be.  But I felt so much better than when I had first left home.  That moment with its own soundtrack had been too real to have been just a coincidence.

At the funeral home, I sat with Mitch’s children, shook hands with old friends.  I stared at his urn and watched the photo slide of his life go around and round.  Never wanting to be confused with a smart person, I had brought along three ‘mini’ bottles of liquor for the service, the last of which was toasted with Mitch’s urn and chugged in front of a chapel full of people.  I was a blabbering, blubbering swirl of emotions: a red flare that my childhood friend Patti had noticed from afar, suggesting a quick escape to the parking lot for a breath of fresh air.

We stood among the parked cars, sharing our thoughts and feelings and a mutual disdain for such ceremonies.  We told stories and laughed, free from the formalities inside the chapel.  As a simple part of normal conversation, Patti unknowingly dropped a bombshell that had me speechless for just a moment.

“You know what’s really weird?  For the past few days, I keep hearing the Rolling Stones on the radio a lot.  Like every other song”

We stood there under a big, blue sky, laughing out loud, feeling somehow a little better knowing we weren’t each crazy, actual happiness blew around with the wind.

I don’t care which of the expert’s theories is correct.  When The Stones come on the radio, it’s Mitch doing his “Jagger strut” across the living room floor.  The smell of a roasted turkey is Thanksgiving Dinner at my Grandparent’s house.  And hopefully one day, I’ll be able to smile as that black sedan drives down the street past my house.

One thought on “Makes Perfect Sense to Me”