As a social studies experiment, I cohabitated with my eventual first ex-wife, just to test how life wouldn’t be after matrimony.  It was the mid-1980’s and her parents owned two properties in Hilton Head, South Carolina. One was a rental and the other was for family when they had the urge to golf or just hangout on the island’s beaches for a while.

The family home was my home with my little honey when the rest of the clan wasn’t visiting.  On those rare occasions when the parents did show up, I made camp at a friend’s house on the other side of the island.

The little cottage of sin was way-out of my league as far as accommodations were concerned.  I had invested very little into the property other than months of cheap dates and a charming personality.  Even while living paycheck to paycheck, I somehow found myself living in Sea Pines, the gem of the gated communities on the island, within spitting distance of the 2nd tee of a PGA championship golf course.

What’s this have to do with alligators?

My first encounter with an alligator was coming home from work late one night.  As me and my little 1964 MGB with its 4-inch ground clearance were traveling down Greenwood Drive at 3AM, I swerved to miss what appeared to be a large section of fallen tree in the road.  As I narrowly missed it, I realized what IT was.  From the safety of the house, I called back down to the guard at the security gate.

“Oh, that’s just Big Sam.  Nothing to worry about.  He passes through there most every night, going back and forth between ponds.”

I’m one of those obsessed fishermen.  If there’s water to be found, I’ll fish it.  Hilton Head is surrounded by the Atlantic Ocean, the golf courses are dotted with ponds and small lakes, there’s even a forest preserve with a big lake, each of which holds tons of fish.

The second two fishin’ spots on that list are also the home to tons of alligators.

Being a small-town boy from the Shenandoah Valley, the only safety hazards involved with fishing my home waters were sunburns, horse flies, and trespassing tickets.  Down at the far end of the 10th fairway of the Harbour Town Golf Links was a good-sized pond which was chock full of big bass, and the home of two big alligators.  One was only six-feet big.  The other was ten-feet big. 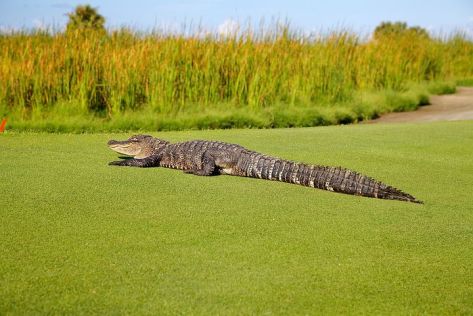 Being halfway smart, the first thing that I always did after arriving at the pond for an evening of fishing was to locate the two alligators.  If you stayed out of their way, didn’t go stepping on ‘em or fall into the water, you’d remain alligator-bait-free for the rest of the evening.

But while you were tracking the locations of the two gators with your right eye, you also had to keep your left eye open for the Rich Hacks attempting to smack a hard-little ball with a stick from 200 yards away, aiming to the left of your fishin’ hole.

Ah fishin’.  I always remembered it as being more relaxing back home.

One evening, Darryl from Ohio had hooked his drive somewhere near the pond’s edge, hidden by the cattails and other heavy vegetation.  As every golfer knows, a lost Titleist is money lost that you can’t spend at the 19th Hole.  So, he went about hacking and whacking with his golf club in the pond’s shallows in search of his lost ball, not knowing that the six-foot gator was mostly submerged nearby.  He didn’t, but I did.

Having studied Darwin’s Theory of Evolution, it seemed that Darryl was a prime choice for the Natural Selection menu.  So, I didn’t say anything.  Fortunately for Darryl though, the gator had apparently already eaten dinner.

A few weeks later, with the ten-footer now guarding the fairway side of the bank, looking for another Darryl, I saw a Mother and her young daughter taking an after-dinner stroll along the water’s edge.  I headed in their direction and calmly gave a quick verbal warning before they reached the danger zone.

It’s empowering to think that you’ve played a part in the Natural Selection process.

While living in Hilton Head, I had two buddies who became constant fishing partners of mine.  Both were from Florida, both had been alligator hunting in the Everglades, and both were named Keith.  There was Big Keith, a tall and slim fellow, and then there was Shorter Keith, who was shorter and much, much wider.

They weren’t exactly what you’d call normal human beings.  Not your Curt Gowdy type of fishermen.  Big Keith had been banned for life from the Huddle House in Hilton Head for mooning an entire dining room full of patrons from outside the restaurant’s large glass windows after a Mezcal-saturated evening.  Shorter Keith had made over 600 parachute jumps at this point in his life, one completely sans clothing while landing on Haulover Beach. Florida’s most popular nude beach.

So, the three of us were in a canoe, fishing disguised as beer drinking, in the middle of the lake in the island’s forest preserve.  The fishing in the lake was never very productive, probably because of the large ALLIGATOR population.  Smack-dab in the middle of nature, Mother Nature started calling on Big Keith, urging him to relieve himself.  Standing at one end of a sporadically swaying canoe, thirty-five yards from the bank of a lake teeming with alligators, Big Keith just laughed and giggled, like a small boy proud of his potty-training aim.  As Shorter Keith and I re-named Big Keith with names that started with ‘You Stupid___’ and ‘You Dumb___’, the Idiot Gods mercifully spared us from the long swim to the bank as Big Keith finally zipped-up and sat down.

As we were leaving that day, we decided to hike around to this one little cove that hadn’t been fished yet that day and try our luck casting from the bank.  There were a few alligators visible in the water when Big Keith had (what he thought was) a brilliant idea.  He commenced to splash his rod tip in the shallow water along the bank while doing his best whistle-imitation of a struggling bird.  Well, our cozy little cove soon turned into a movie set, with an inebriated Ron Ely starring as Tarzan.  Three gators became six and then became nine.  Being the voice of reason, Shorter Keith started whispering “I’m going catch one of those bastards”.  While retrieving the first long cast of his top-water lure, one gator made a violent splash as it turned to swallow the gurgling bait.  Now with the gator parallel to the bank, Shorter Keith delivered a perfect second cast, ten feet beyond the prey, the line coming to rest on the back of the beast.  As the retrieved lure reached the gator, Shorter Keith yanked his rod back to set the hook.  The barbed treble hook of his Jitterbug lure pierced the armor of the prehistoric leftover.  Instinctively, the gator submerged.  Shorter Keith’s fishing rod bent into a dangerous looking U-shape.  Then the lure came unhooked and whizzed over our heads, landing twenty-some yards behind us in the woods.  Dejected, we went to Happy Hour.

One quiet afternoon, Shorter Keith and I were fishing from the banks of the forest preserve’s lake, not another person in sight.  Which was quite often the case back in those days, with no access by gas-powered vehicle, only a hike down a path through a thick forest would get you there.

We had each settled into a deep Zen-fishing mode, separated by a good fifty-yards of muddy bank, a variety of birds providing the only chatter of communication.  Shorter Keith didn’t even speak English that well, but suddenly he started screaming in what sounded like four different languages.  Not wanting to hear any lies about the size of his humongous bass later that day, I headed in his direction to check out his trophy catch.  As I neared him, I realized that he wasn’t speaking foreign languages, but a very adult list of expletives from the Urban Dictionary.  Seems that Shorter Keith had slipped, and slid down the muddy bank.  And when he entered the water, an unseen alligator had taken a big swipe in the direction of his right leg.  Despite being injury free, Shorter Keith didn’t want to fish anymore that day.  Something about changing his pants.

During my time on Hilton Head, a large alligator drowned after becoming lodged in a water drainage pipe.  Members of the South Carolina Fish and Game Department performed a necropsy.  Among the stomach contents examined were the mostly metal remnants of six dog collars.  “Mommy!  Scruffy didn’t come home last night”

So, if you’re watching the next Heritage Classic, live on CBS Sports in beautiful Hilton Head Island, South Carolina, think of me when the golfers reach the 2nd tee.

And try not to think of Scruffy.