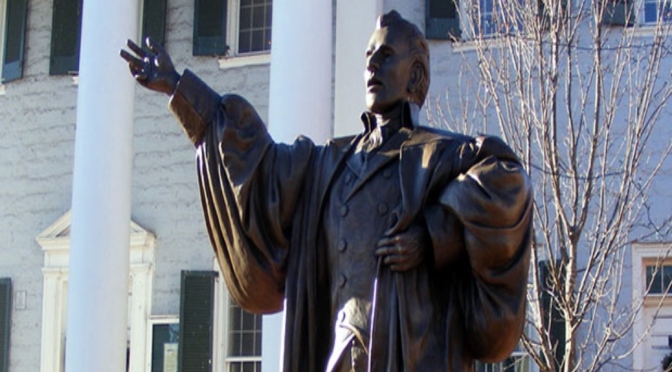 This video is of Main Street in Woodstock, Virginia filmed by Sam Smith sometime during the late 1940’s.   Read my short gibberish and then watch a really cool video.

The opening scene is of the hand-railed stairs that led down to Cook’s Barber Shop in the center of Woodstock, the handrail which can still be seen at what is now a First Bank, directly across Main Street from the historic courthouse.  Behind that was the Farmer’s Mutual telephone company.  My Aunt Dot (Dorothy Lambert) worked there as an operator, manually connecting callers through a telephone switchboard.

The second scene was filmed from that same site, across from the courthouse, looking South up Main Street (Route 11) towards the original site of the Walton & Smoot Drugstore (you’ll see people going in and out of their front door).   There is a U.S. Marine recruitment sign (sandwich board) in this shot, to the left of the men standing on the sidewalk and the boys on roller skates (one of which is quite possibly my Father, Carroll Lambert as a boy).

There’s a quick shot of a large black car with a light on top.  That’s a Dellinger Funeral Home hearse, which sometimes went on emergency calls to the scenes of accidents and other dire situations.

The film may have been made during a colder time of year, but it’s obvious to notice that the gentlemen all wore hats and the women all wore dresses.

The gentleman in the next scene, walking with a limp, with a large white object above his left hip, is Wilmer Stickley.  He sold the Grit Newspaper to the town folks.

The next gentleman approaching the camera, with a three-piece suit and black tie, his assistant wearing the blue sweater with her business suit, is Bill Logan, Sr.  The first in a long line of local attorneys.

Next, carrying the small box, is my father’s brother Gordon Lambert.

The rest of the people walking Main Street are yet to be identified, but not forgotten by someone.

If you happen to recognize someone, or something, let me know so that I can update these wonderful archives.

One thought on “Main Street of Woodstock, Virginia in the Late 1940’s (Video)”