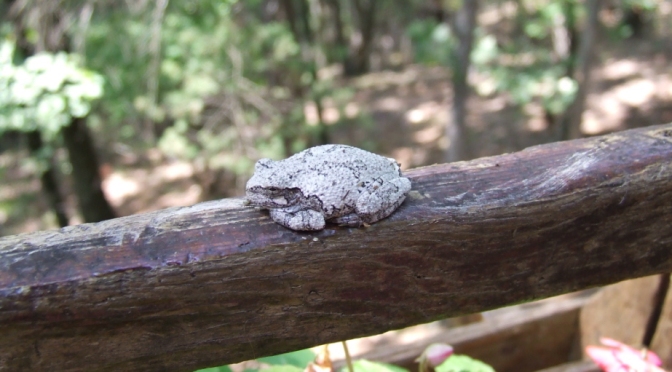 I wrote a very short story yesterday entitled You Know You’re in a Small Town if… which naturally had me reminiscing and dreaming about those days up on the mountain.  Some of us constantly need people around.  Some are happier being alone.  And somewhere in the middle is a really nice place to live. 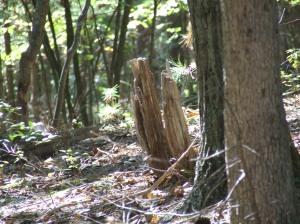 The house in which I lived was buried in the forest on the slope of a mountain.  It was a house built on stilts, the sliding front door accessed from the ground level, but a peek out of a back bedroom window was three-stories above the forest’s floor,which was matted with leaves and pine cones.  The early morning silence of enjoying that first cup of coffee on the deck while staring off into a canopy of trees was often snapped by the sudden emergence of a half dozen deer nibbling new growth off  the smaller bushes and patches of grass.

I only had one neighbor, who rarely spoke to me or anyone else, so I basically had no neighbors.  Morning coffee on the deck was drank while wearing underwear or sometimes nothing at all.  Target practice with a 22 rifle only bothered the deer yet never brought about any other complaints.  If you were as silent as the woods, you could find yourself having quiet, polite conversations with your real neighbors, the animals of the woods. 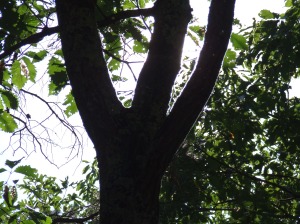 Example being, a squirrel pausing on the deck handrail, as you looked up from your steaming cup of early morning coffee.

Whispering to the long-tailed rodent “Hey dude, how’s it going?”

And the squirrel would just look at you with a cautious, puzzled look on his face, as if to say “Why are you up here in my trees? and Why are you talking to me? I don’t even speak English.”

The deer, the tree toads, and the chipmunks had varying levels of reaction.  A startled deer would mystically, somewhat silently bound-off into the woods and become instantly invisible. When a tree toad’s space was unexpectedly invaded, they would just sit there, going with the defense strategy of “Hey, I’m a fat blob of gooey crap covered with warty skin. The next move is yours.”  And chipmunks are nothing like Alvin and his brothers. You don’t just sneak up on a chipmunk.  They sense your presence and streak below your field of vision to a predetermined exit hole just to scare the heck out of you.

If you live up on a mountain in the middle of nowhere, you should drive a truck.  The truck that I drove was my Dad’s old truck, a 1979 Ford F-150 Explorer.  (Yes, cynical crowd, there was an Explorer pickup truck before the days of Soccer Moms and Helicopter parents).  Why drive a truck?  If you live a quarter of a mile off the main road, up a 40 degree slope that’s covered in snow, a Cleveland 351 engine powering a manually locked-in four wheel drive transmission will get you back to the house.  Road or no road. 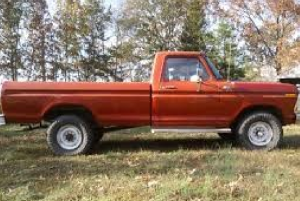 And old trucks have other advantages.  If you go trout fishing deep in the National Forest and scratch the truck’s finish with tree limbs as you search for a place to park, it has the opposite emotional affect of “an insurance claim”, more of a badge of honor knowing that the truck’s second coat of paint was applied with several cans of aerosol spray.

Big old trucks have nicknames, not like ‘Pricilla’ or the ‘Bug’, but manly names.  My truck was “Big Red”, not a name that I came up with, but a name that had been handed down from generation to generation.  Owning a big old truck gives you instant membership into the “Club of Men that Drive Trucks”.  Commuters on the Washington/Baltimore Beltway never wave to one another.  My God, it might be interpreted as a gang sign or something even worse.  But on the backroads of the mountains, a wave between the drivers of pickup trucks is mandatory, each driver with his own unique style of acknowledgement.  A single finger raised from the grip of the steering wheel.  A finger pointing “Right Back at Ya”.   But nothing too elaborate.  A twirl of fingers from both hands would likely get yah a response of “Who in the hell was that?  Damned tourists”

When my city-sister comes to visit, the first thing that she does, after parking her car in my driveway, is to lock the car’s doors.  On the list of “Most Frequently Stolen Cars” the ’79 Ford pickup with extensive body damage and a hand-sprayed coat of paint is way down on that list.  I rarely locked that house on the mountain, but never lost my keys.  “Ooo, ooo, where are your keys?!”  “Well, dah.  They’re out in the truck where I left ’em”  Keep it simple.

If you live in a city and take a peek outside you’ll notice that there are no telephone or electric poles.  Things are different in the middle of nowhere.  Any snow, sleet, or lightning storm could easily knock out  your phone, electricity, and (God forbid) the Internet for hours, even days at a time.

There were stretches of time living alone on the mountain where I’d go days without showering, wearing shoes, or talking to another human being.  And you know what? That’s not such a bad thing.  But I’m not really wired that way, I’ve gotta talk from time to time.  I’d occasionally travel the half-mile down the hill to visit the local Community Store.  I usually didn’t need anything, but there were people everywhere, in and around the store.

Living on a mountainside in the middle of nowhere makes you a better planner.  You can’t just ‘run out’ for a soda at 9PM on a Sunday night.  There were no stores open in a 30 mile radius.  Take away your phone, electricity, and Internet after a big snow storm and things became very 1880’s, really quick.

Hours after a lightning storm outage one afternoon, the day turned into night and everything became very, very dark.  There were no lights or television.  There were no streetlights because they never existed in the first place.  Just trees and darkness and silence and the rustle of leaves and the occasional knock of a pileated woodpecker frantically looking for dinner.  I enjoy my alone time, but eventually made my way to the front seat of Big Red and turned on the radio.  The dial was preset for a Classic Rock station, but that’s not what I was really looking for.  I just wanted to be reassured that the world was still out there, and to hear some noise. 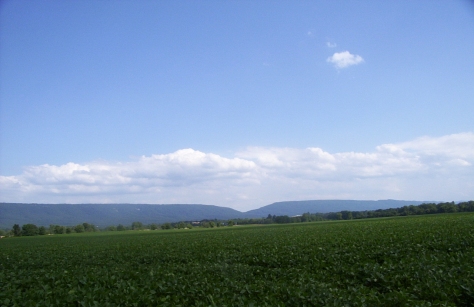 One thought on “Life on the Mountainside”