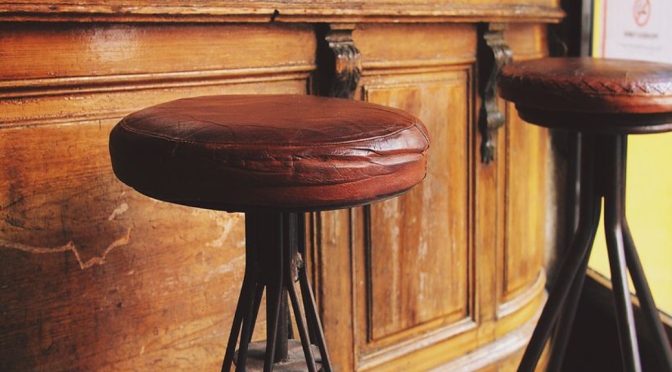 I was sitting at a bar one afternoon, hanging out with the regulars, just sipping on a beer and shooting the breeze.  I hadn’t been born or raised in the area, but had morphed into a bar fly through osmosis, averaging four or five visits a week, and talking a good game while possessing the ability to drink to an unhealthy level while still working a job for 60 hours a week. That made you normal, just one of the guys.

From my house in the middle of nowhere, there were only two bars open within the next twenty miles. One was at the small ski resort down the road which served over-priced everything to the weekend warriors visiting from the city.  Ours was the other bar, which had different names throughout the years of  ‘a change in management’, but was locally referred to as ‘The Pub’ or ‘The Diner’.

The locals visited the ski resort’s bar only on Monday nights because that was the night that ‘The Diner’ was closed.  The Monday evening’s happy hour at the resort usually started in the parking lot to offset the cost of the $5 draft beers and $9 hamburgers.  The Diner’s bar had been blessed with a ‘Grandfather Clause’ which kept it smoke-filled after no-smoking-at-all bans became law throughout the rest of the state.  So, everyday at 4:30, there was a smoke, a beer, and a dinner of meat, cheese, and bread.  And mayonnaise.

Tourists were welcome at The Diner, but only after immediately being identified as a tourist and filtered as worthy of joining the crowd of regulars at the bar.

“Where are you folks from?

“How do you know we’re not from here?”

“Nothing personal, folks.  It’s just that I know everyone that lives here”

One instant exception to the house rule was Big John.  He was an absolute mountain of a man.  His head, body, and personality were so large that he became an immediate regular.  A retired Philadelphia police officer, his wife and himself had purchased a weekend home just up the road near the resort.  Any man the size of a mountain who could drink a dozen beers and remain personable was automatically accepted by the Local Order of Bar Flies.

Memorably for Big John, I was one of the first locals that he met after he had accidentally strolled through the front door of our man bar/cave one fateful day.

“Hey, what a great place!  Do you guys come here a lot?” he asked as his body blocked any trace of late afternoon sun creeping through the bar’s dirty windows, creating an intimidating, yet comfortable darkness over my bar stool.

“Yea, we usually do this everyday at 4 o’clock.  Hey Dave!  This is John.  And over there is Dave C.  And that young guy is Dave Junior.  Next to him is Jack the Pirate, Mike the Balloonist, Popcorn Bob, Paul the Realtor and of course you’ve met Morgan the Bartender.”

“Everyone has a nickname?  What about Dave and Dave C.?”

“They’re not nicknames, John.  It’s like a middle-ages feudal system in which individuals were identified by their professions.  Except that we don’t have any Smiths or Millers.”

But what about Dave and Dave C.?”

I wasn’t a real local regular but had been accepted as one due to my long hours put in at the bar over the past several years.  The usual crowd of a half-dozen or so men were hard-working, born and bred, very conservative locals (there weren’t many females patrons early in the evening, they usually showed up after 8 or 9PM).  One afternoon the chatter sank to a discussion of a ‘famous’ free-loading young woman who had married a very rich old man in anticipation of his quick demise and her instant big payday.  I was feeling funny that day and interjected with what I thought was a little bit of humor.

“Shoot, I’d sleep with that old man for 200 Million Dollars”

Everyone at the bar stopped talking, looked in my direction, but no one said a word.  And after a long moment of uncomfortable silence, the boy-talk continued with me momentarily shutting my mouth.

One afternoon at the bar, the talk turned to the subject of health care.  But not like the conversations of my city family and friends with their HMO’s and full coverage plans. Several of my bar fly buddies did not have or had never had an actual medical insurance plan as a benefit of their current profession.  But this wasn’t a political argument of what was and was not acceptable .  It was just the way that it was.

The casual, matter of the fact confessionals were given by everyday, hard-working men.

“I had a freaking tooth one day that was just killing me!  I just packed my cheek with a zip-lock bag of ice for an hour or two, and then used a pair of Vise-grips to pull that sucker out.  Yea, it hurt like hell, but a little of Johnny’s moonshine had me sleeping in no-time and the next day my freakin’ mouth was fine.”

And everyone just nodded their heads in agreement.

“You ever smash the heck outta your thumb with a hammer?  And the blood swells up behind your fingernail?  Everyone knows you just run an electric drill into your nail to release the pressure, but I found that it’s better to use a masonry bit instead of a metal bit, it doesn’t split-up your finger nail so bad”

Twenty miles out-of-town and a million miles away.