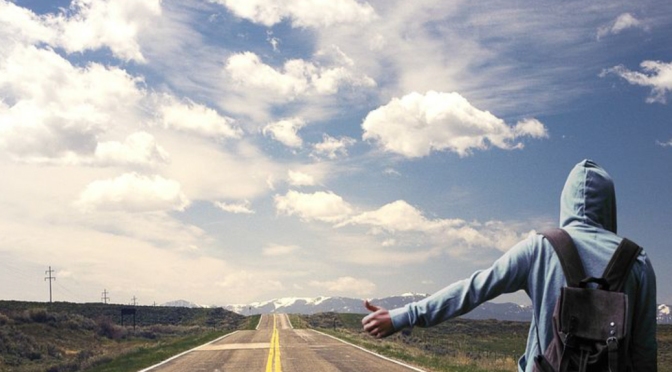 I was loading groceries into my car in the Food Lion parking lot last week, when a young woman approached and asked for a ride up the road to her job at the Pizza Hut.  I was like “Sure”, while calculating that I had ice cream in the car, but the local Pizza Hut wasn’t that far out of my way.

She was a talker and I learned a dozen personal facts before we had reached the first traffic light.  But I’m a lonely person and it was nice to hear her ramblings.

Then I suddenly morphed into Mature Father Figure.

“You know, a young woman like yourself needs to be careful asking for rides from strangers.  I’m fairly normal, but there’s a lot of crazies out there.”  Then she made my day when she said that I seemed like a nice person from afar or else she wouldn’t have asked for a ride in the first place.

Which got me thinking…

I’ve apparently matured, fifty years too late, because I used to hitchhike quite often.  It’s one thing to ask your neighbor for a ride down to the Dollar General, but to hitch rides every weekend or across state lines, takes it to another level.

Way back when I was near twenty, I lived in the big city of Harrisonburg, Va (30,000) in an old house with four other guys, who I never met.  I didn’t have a car.  Rent was fifty-dollars a months.  I was a grill cook at a steakhouse run by a Baptist family.  This was during my Jim Morrison days, just walking the streets alone trying to find my way in life.

There was a girl that I fancied, that I adored, who I had left behind some thirty-miles North of that current situation.  Have you ever seen a bull in heat, struggling over a barbed wire fence to get to a cow in the next pasture?  That was me back then.  I could walk around the city’s downtown and back and forth to work, but to get back to see her for a weekend took an entirely different, extreme effort.

A mutual friend of ours worked in Harrisonburg and would give me rides on Fridays to go see my obsession.  Every weekend it was the same thing.  I was in bliss for 48 hours and then Sunday would come along.

“Well, that was fun.  Now, how in the heck do I get back to Harrisonburg?”

So, every Sunday, I would stick out a thumb and start catching rides back to my job, my roach apartment, and my belongings.

Hitchhiking was not uncommon back then and was not looked upon with a flurry of questions or suspicions.  Some people had automobiles, some didn’t.  To stop-off and give a ride to a fellow human being was a nice thing, later to be soured by horror movies and over-hyped media reports of crimes committed by hitchhikers or the drivers themselves.  Hitchhiking is still legal in 46 of the 50 U.S. states, with the exception of some highways for the obvious safety reasons, but it is still frowned upon because of a few silly dismemberments, kidnappings, and axe murders.  (Just kidding, sortta)

I caught a ride one Sunday afternoon with a Mennonite family.  Not an Old School family with a horse and buggy, but in the second tier of modern Mennonite status, a family in a big, black, non-descriptive vehicle.  I got to ride up front because that’s where the men rode, the women always in the back seat.  They drove my sorry, hungover ass some twenty-five miles South, not just near my apartment, but curb-side, right in front of the building.  Couldn’t have met nicer people.

I went to college in North Carolina, Salisbury to be exact.  My roomie’s name was Rick Swartz (his real name, I hope that he reads this because I’d be happy to reconnect). Spunky was his nickname.  Or sometimes Spunker.  Or  sometimes ‘what are you, a dumbass?’

Like 1/3 of my classmates in North Carolina, he was from New Jersey.  The tuition was cheaper outside of the Garden State.  His girlfriend Andrea had called from New Jersey with the wacky idea of taking a Greyhound bus down to visit him.

“The closest stop is in Boone.  Is that far from where you are Rick?  Can you meet me there?”

Just like that bull straddling the barbed wire fence, Rick replied “Oh yea, no problem, Boone is right up the street.”

Two hours up the street.

Somehow, I got dragged into the quest.  Neither he nor I had a car, which was pretty common amongst college students back then.  But who did have a car?  Our dorm buddy Mark!  Mark was an annoying person, a possible mass murderer, a hairy person with a Burt Reynolds mustache who always wore black clothing, along with an attitude.

So naturally, we asked Mark to give us a two-hour drive North to pick-up Spunker’s girlfriend at a bus station for which we had no address, no phone number, only the town’s name.  Boone, North Carolina.  It was up in the mountains, the skiing area of North Carolina, up North of us, or maybe it was North West.

But that wasn’t important right now.  What was important was that Mark didn’t know where Boone was when he agreed to give us a ride and we had ‘forgotten’ to tell him.

About ten minutes out of Salisbury, Mark began questioning our final destination.  When the real story was confessed, a verbal argument broke out.  Determined to reach our ultimate goal, Spunker, our now then 8-pack of canned beer and myself demanded to get out of Mark’s car.

And hitchhiking, we ten went.

Over those next several hours, we caught rides with five different vehicles.  Maybe it was just the sight of two college freshman carrying a carton of beer while sticking out a thumb for a ride, but we kept getting picked-up by fellow party people.

There was the typical Cheech and Chong VW bus with funny smelling cigarettes.  The Chevelle of teenagers out for a joyride.  The well-dressed businessman driving a BMW, who offered us free access to his Playmate cooler full of beer and liquor, as he cranked up some Allman Brothers on the 8-track player.  Free travel had been very accommodating to us.

We reached the bus station around 9 PM, just as Andrea was arriving.  Actually, it was about twenty minutes after she had gotten off of the bus and had begun to worry.  But we were there to reassure her fears.

Well…….that didn’t go over so well.

She wasn’t impressed, nor her mind put at ease, at how easily we had traveled the 2-hour journey in only 5 1/2 hours utilizing our new expertise in hitchhiking.  Just as her curse words turned into tears, a couple who had reunited at the bus stop offered us a ride.  Down the roads a way we went, not too far, but it was a start.

We walked for quite a bit, the traffic on the road quite sparse and unwilling to move us along any further.  The reality of the moment was that we would be spending the night alongside the highway.

Rick’s boney ass and comfy jacket kept Andrea warm as we settled in for the night on the slanted hill near a bridge overpass.  It was quite chilly that late November evening and I’ll never forget the feeling of burying my head in my hands, sprawled facedown in the grass while trying to get an hour or two of sleep.

As the sun rose, as did we, our determination marched itself down the highway on a trek back to Salisbury.

Then a van saw our thumbs and came to our rescue, pulling to the side of the road.

“Where you folks heading to?”

The van wasn’t really a van, but more of a small bus.  Small as in, does Johnny ride the Little bus or the Big bus?  We climbed into the three remaining seats of a special education transport bus, with the students of a school in Salisbury.

The van’s driver literally dropped us off at the sidewalk to our dorm.  Now, there’s a unpolitically-correct joke there somewhere, but I’m not saying nothing.  Make your own.

If you’re not bored yet, here’s another story.

Back in the Harrisonburg days, I was walking over to my friend Mitch’s house, carrying a cooler of un-iced beer to begin my day-off from work the right way.  It was similar to Jim Morrison walking the beach in Venice, except that I was just passing the cemetery on Reservoir Street when a car pulled next to the sidewalk.  An ugly, yellow Mercury Bobcat.

The driver leaned towards the open passenger window and yelled “Hey, you need a ride?”

There was something weird in his approach, so I politely lied and told him that I was almost to my friend’s house.  Which I wasn’t really, but off he went.

A month or so later, I was walking to work one morning.  Just as I reached the bridge on Route 33 that crosses the Interstate, a car pulled over.  An ugly, yellow Mercury Bobcat.

The same guy asks “Hey, you need a ride?”

I could see my restaurant in the near distance, so this time I wasn’t lying.

The scary side of hitchhiking.

Nowadays, in the big picture of the world, Americans are too lazy or suspicious to be apart of the hitchhiking scene.  In Cuba, it’s mandatory for government vehicles to pick-up hitchhikers, provided there’s a seat available.  In countries such as Nepal, hitchhiking is very common in rural areas. Many do not own cars, so hitchhiking is a common practice especially in and around small villages.  Lots of countries around the world have designated areas for hitchhikers to congregate while waiting to legally catch a ride.

But to the kiddies that might be considering their first hitchhiking adventure, remember these helpful safety guidelines…

One thought on “Hitchhiking – A Bygone Adventure”