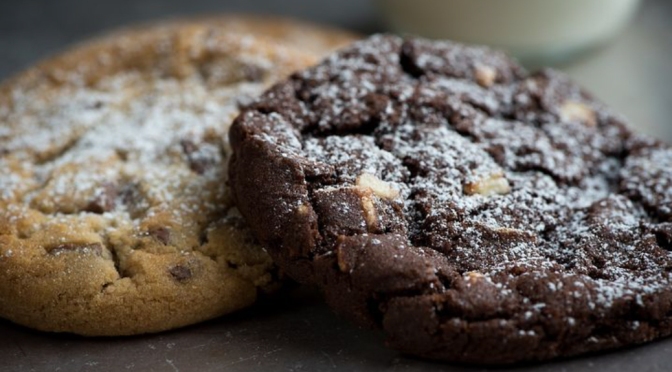 Anyone that knows me well, knows that I can cook well. As in professionally. Most people can’t understand the concept, but after a 6-day workweek in a restaurant, I’d often spend a majority of my day-off cooking just for myself, or family, or to impress a future ex-spouse.

And when asked “What’s your specialty?”  I’ve always answered “Creativity”.  I take pride in being able to look inside a 25-square-foot refrigerated cooler and mentally develop a menu from the pieces of the puzzle lying around on the shelves.  Which carries over to that lone day-off from work and cooking just for the love of cooking.

Being a professional bachelor, planning a dinner for myself starts with a thought process like this…

I once wrote a cookbook.  I love Old Handwritten Recipes handed down from generation to generation.  So don’t get me wrong, but when I have the urge to make something different at home, and I have some chocolate, some coconut, a couple of eggs, and a fully stocked pantry of baking goods, I do what the modern world does.  I simply Google “chocolate, coconut, eggs”.

And then I start reading through the thousands of recipes that pop-up.  The big foodie websites like Food Network, Epicurious, and the larger food producers (Gold Medal Flour,etc), have a One to Five Star rating system, voted upon by actual readers.

(For Mother’s sake…An Internet Troll is a member of an online social community who deliberately tries to disrupt, attack, offend or generally cause trouble within the community by posting certain comments, photos, videos, GIFs or some other form of online content.)

I used to read the Comments Section on all sorts of websites.  In politics nowadays, you’ve got to read 5 or 6 different articles to get to the truth behind the 1 headline that you had already read in the first place.

Comment Sections on the foodie websites are hilarious.  They are good to read before actually using a recipe because there might be a pattern among the reader’s comments.  Like pointing out an obvious typo (“Shouldn’t it be 1/2 cup of milk instead of 12?”).  But informative can quickly turn into entertaining.

So, I’m watching the hockey game the other night (Go Caps!) while playing on my laptop, and I started to drift off on a strange tangent of thought.  Strange for some, normal for me.  I had just made a batch of chocolate chip cookies that afternoon.  During the game’s 2nd intermission, it dawned on me that I hadn’t even used a recipe, having made the recipe 1000 times before.

“I wonder what the Comment Sections look like for recipes of one of America’s most popular cookies?  The chocolate chip cookie.  Surely (please don’t call me Shirley) there must be a unanimous love of this American classic.”

The following is what I copied word for word from various Comment Sections during 2 Periods of hockey.

“The cookies are tasty, with a nice chewiness. I substituted an avocado for one stick of butter. This recipe requires staying near the stove during baking, which is a little more work than I’d like.”

“Why do you need baking soda if you do not want it to rise anyway?  nobody in my family likes the feeling of baking soda on his teeth hence the question”

From Martha Stewart.com  “THIS USES Fahrenheit NOT Celsius. I BASICALLY BURNED MY HOUSE DOWN. THANK U, MARTHA (recipe called for 350F which would be 662F in the reader’s 350C oven)

“Secondly, since I’m trying to save my eggs I opted to just use one egg instead of the two. Lastly, I did notice both from last night’s batch and this afternoon’s batch that the batter was a tad bit too loose for my liking so I just added an extra 1/4 cup of flour” (try, try again)

This is from Allison..”This is the WORST recipe I have ever used! I followed everything and they turned out completely terrible! You should really rethink these cookies. Just terrible” (This being the basic Tollhouse recipe that millions of people use.  Hey, we’ll have to change it.  Allison said so:)

In true troll fashion, the Nestle website had numerous mentions that the recipe was ‘a waste of my ingredients’.  Nestle had employees replying to disgruntled readers with “You’ll be receiving an Email from us shortly”, so I’m thinking that Nestle must be giving away something for free if you complain enough.

One gentleman was “a chef of 40 years”, yet he was having trouble using the recipe from the back of a plastic bag of chocolate chips?

From the Eating Well website…A 2-star rating… “too sweet. Hi i made these today with my kids 😉 i substituted the white sugar with honey which made the mixture custard-like and super sweet. We achieved the chewy texture by grinding oats into a flour and adding the honey. Next time i will try a couple of tablespoons of maple syrup as my kids dislike the excessive sweetness. The honey was overpowering!  (the honey that wasn’t in the recipe in the first place:)

A word from the unwise (me).  When there were 266 reviews of a simple chocolate chip cookie recipe on one website, and you were one of five people who didn’t give a 5 or a 4 star rating, but instead a 1 or a 2, the recipe might not be the problem.  Just saying.

Maybe the world’s just pissed-off at everything… there were people cursing at Martha Stewart over a cookie for goodness sake.  All of which has me a bit stressed.  I think I’ll go have a cookie or four.  Chocolate chip, my favorite.